This week marks the end of my second year of commuting to work on my bicycle.

I’ve clocked another 5000 km through some crazy winter weather, and some spectacularly beautiful days that I wouldn’t have appreciated as much from inside a car.

My calculations show again I’ve burned about 500,000 calories this year, or the equivalent of 2888 bottles of beer. I never feel guilty having an extra one (or two) with that kind of credit in the bank.

Despite having all the beer and desserts I want, (which can be quite a bit at times), I’ve got a resting heart rate of 56 which according to Wikipedia  puts me in the range of an athlete. I know, I know. As life will have it I’ll probably drop dead of a heart attack, but for now, I’ll take it.

This next year will be different, as I’ve moved offices downtown cutting 30% off my ride. Unfortunately, I lost the best 30% of it, through Stanley Park. 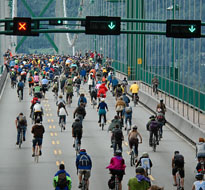 I’ve learned a few things this year, including:

– @Schwalbe_NA tires are kick-ass. Mine have performed flawlessly for over 10,000km so far and looking good.

– getting out the door is the hardest part. I’ve never once been on the bike, and wished I wasn’t.

– there are just as many courteous, aware drivers out there as there are stupid blind ones. But they don’t stand out as much as the idiots do.

– when in doubt, take the lane.

We must continue to make it easier for people to get on a bike instead of getting in a car. Bike racks, dedicated lanes, tax incentives, road laws, you name it. It might cause short term pains, but in the long run, it’s the only way to go in the city.